Saturday at 2 p.m. found friends and I at a meal put on for us by some dear Iraqi refugees.  The table was loaded with stuffed onions, stuffed eggplant, spring rolls, amazing colorful and seasoned rice, hummus, and much more.  Their joy.  Their hospitality.  Their laughter.  Their generosity.  Their hope.  Left me feeling both full and hungry.  Full at their example.  Hungry in my need to learn from them. 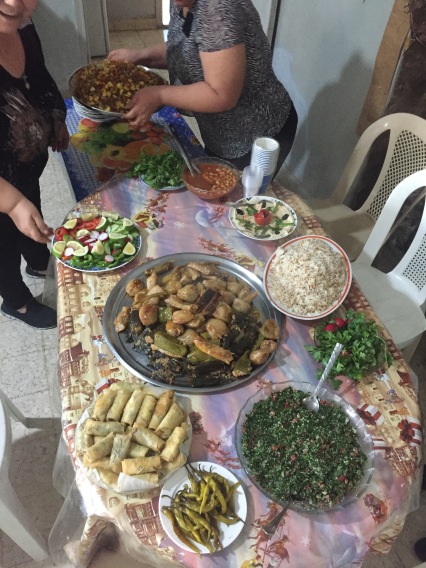 In complete contrast, today found me in a Syrian refugee home.  Five girls.  One son who was tragically killed in an accident a year ago.  We were in their “new” home, which they moved into, literally in the middle of last night, because they could not afford the rent in the last place.  The girls were chattering away to me about how much better this place was because it was so much bigger, and the rent was cheaper.  I saw nothing “better”.  I saw only dark broken steps leading up into their apartment.  Drab dingy walls, that needed fresh paint, twenty years ago.  The mother shows me her scar on her belly where she was operated on, after a bullet entered her abdomen while they were still living in Syria.  Now she has only one kidney, thanks to that.

I am overwhelmed at the thought of:

Being shot and losing a kidney.

Fleeing a country to stay alive.

Trying to rebuild in a new country, where work is almost impossible.

The one son, dying (sons are extremely important in Arabic culture).

No money coming in consistently.

No milk for the baby.  No bread for supper.

I was only there for two-and-a-half hours and I don’t even know how to process such difficulty.

I heard a statement this week, that we need poor people in our “Christian” lives to make us more like Christ.  I needed to see that dear family today.  More than they needed to see me.

I wish I had some profound way to end this.

The needs are vast, and I’ve only just begun this precious journey with the refugees.

“There are people in the world so hungry, that God cannot appear to them except in the form of bread”.  Mahatma Ganddiii

“God does not create poverty; we do, becuase we do not share.”  Mother Teresa

3 thoughts on “Journeying with the Refugees”