Today I took my longest sharpest knife and attacked the bound roots of a potted trailing ivy plant, determined that I would win and divide it into smaller pieces.  Liberating this ivy into bigger spaces. I intended to hang it off my balcony railing in two different window baskets.  I was reminded that moving transculturally is likened unto tearing roots from a bound plant and replanting it into new soil.  It seems and feels destructive.  The results are new growth, more plants, and broadened horizons.  Also, things are happening that are unseen and unknown to us.  Perhaps this is the most exciting thing about being uprooted.

A few weeks ago, I am taking in the first Christmas concert of the season.  I was enjoying the traditional music, the new to my ears Arabic Christmas music, singing in the choir and my husband sharing a message.  I was immersed.  Suddenly, somewhere between English and Arabic translation my mind wandered.  I was on a hill overlooking a city and a lake, night was upon us, people were milling all around me.  These were my people, most whom I had taken care of in some aspect of their healthcare.  We had a bond.  Those Christmas programs were my most favorite nights in Papua.  Nostalgia filled me instantly.  I wanted to give in to pouting about my torn-up roots that were still not fully grasping the newness of bigger spaces.  Yet thankfully, within seconds, I was able to sort out that Papua was a beautiful place for me, but my new soil and window basket has many beautiful elements that must be appreciated.  Perhaps what excites me the most, are all the unseen and unknown things that are lining up for our future here.

The next morning found us an hour away from home in a little old church that pre-war was a thriving center of activity.  Now it is boasting if twelve members are present when the doors are open.  Further north from Beirut, and no insulation, we sat around electric heaters as we worshipped together.  Despite the small gathering and the cold, our hearts were warm at the work we saw there.   After church I enjoyed talking with two elderly sisters, who had worshipped there most of their lives.  They shared with me many stories but interwoven into their roots were stories of deep tragedy.  They had a sister who had five young boys and during the war the entire family was shot.  Perhaps it would be easy to criticize these ladies for their bound roots to this church and its history but this one tragic story revealed that their roots had been torn and pulled and scattered and stomped, cut off and killed, and this was one part of the root that was stable and a great source of joy to them.  Even so, as things are unseen and unknown to us, may new growth come.

From this part of Lebanon, we drove another hour up into the mountains.  The higher we drove the cloudier it became.  Threatening rain, and at this elevation, snow.  We watched the thermostat drop 20 degrees, putting our tropical bodies into a constant chatter about how cold it was outside.  At last we reached a place to walk with young Cedars of Lebanon enticing us to step outside and explore.  As we walked the clouds lifted and we were refreshed with a gorgeous crisp evening that invited our roots to sprout deeper.

Two nights later we were invited to take in a professional Christmas concert at the nearby American University of Beirut (AUB).  Delayed for different reasons, we arrived right at start time to discover no more room in the auditorium.  However, our eight years of training in Asia, taught us to persistently press into the crowd.  Ever so slowly we pressed and wiggled half-way down the aisle.  The music was so delightful.   Mid concert we even obtained seats.  The old traditional Lebanese building and the whole experience was a dose of water and sunshine on us, encouraging new growth.

Seven days later, I find myself attending the packed auditorium for the Syrian Refugee Christmas program. Parents recording each of the children’s performances.  It was chaotic and out of tune.  Bustling with life and kids everywhere.  Energy, exuberance, and joy beamed from each of the children.  At least three times, I wiped tears from my eyes….so touched was I at these displaced people, struggling to survive and so grateful for what they have received.   I can’t even begin to imagine what happened to their roots and their plants, and the continued struggle to just maintain some sort of survival, no mind about trying to thrive.  Yet here they are, repotted, for such a time as this.

That same night, the boys and I, along with another family and friend decide to head to the same University (AUB) for another free concert.  Darron was away.  This time, we were smart and arrived 45 minutes early.  Which allowed us to obtain seats on the last two back pews.  15 minutes prior to the start of the program the crowd became very restless and started chanting “Thoura, Thoura… (Revolution, revolution).”  In time, a Lebanese gentleman who was sitting close to us explained that a former prime minister was present, and the people wanted him to leave.  Despite multiple attempts to quiet the crowd, the people did not settle down until the former prime minister exited the building.  It was an unforgettable moment, to be caught in a crowd full of such emotion and passion.  Afterwards we ate warm crepes outside filled with all kinds of different things.  They were conveniently cut in bite-size squares and we shared them amongst us and debriefed our “Revolution” experience.  One fun part of being transplanted is it always equals MORE stories to tell!!!! 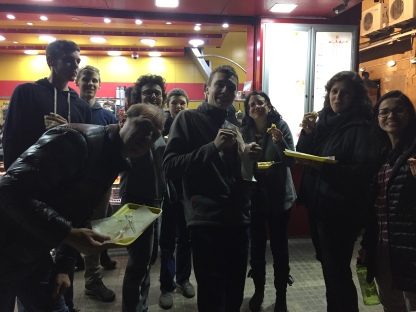 Unseen mold became seen this last week all over our bedrooms as the cold, damp humidity seeped into the non-insulated walls.  The humidity levels were measuring in the 80% range.  I fought with my attitude to praise instead of belly ache for the mold, because at least I have a home in which to wash it off the walls, and the money to go and buy a dehumidifier.  Sometimes these are the things that push us the most and where we feel stretched taut.  Gratefully the humidity is now lowered to in the 60’s % and the mold is mostly all washed away.

Darron met with someone this past week, whom he had encountered over 30 years ago while he was cleaning a nursing home in Knoxville, Tennessee.  This mutual bond and shared experience of a time and place will be a key to this relationship.  What an incredible insight into something that could only be orchestrated by God.  Something that was unseen became seen, and it is unbelievable.  The intentional detail of a Creator who wastes no pain and no opportunities.  He sometimes uproots to provide more opportunities and growth.  Sometimes He invites stability and little change, for these roles are important too…like anchors in the ground.

Wherever you find your roots this Christmas season, it is my wish and prayer for you, that they may find the living water and not thirst.  That they will seek the true Son.  That they will grow and flourish and take root and have more stories to tell and peace within. 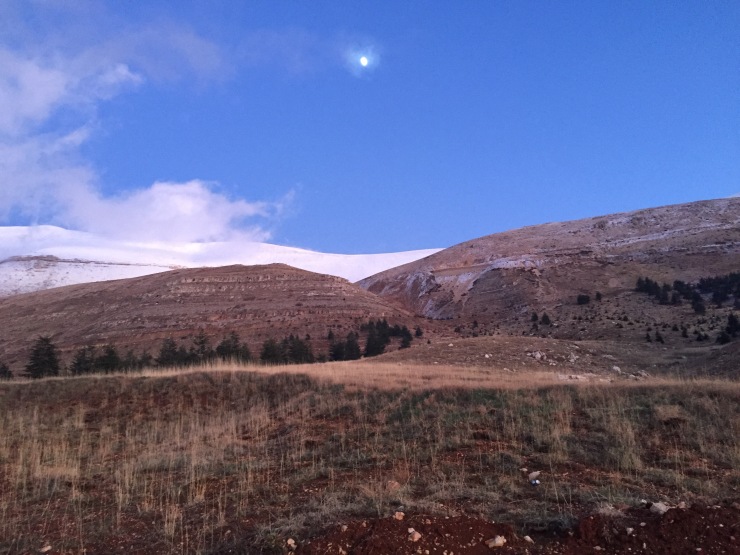 I would love it if you signed up to receive this blog.  You can do this by scrolling to the bottom of this page.  There you can click to enter your email address, then you will receive notifications of new posts by email.  Thanks so much!

2 thoughts on “The Unseen and the Unknown”