I never dreamed of living in the Middle East.  I admired people who did it, but always thought, “That will never be me”.  Yet, here we are, almost ten months deep into living in Lebanon, “the gateway to the Middle East”.

Recently, I have started searching for one new thing each day that I appreciate about living in Lebanon.  I find that this exercise in other areas of my life has been suprisingly fruitful.  That is another story.  This story unfolds with one small aspect of my gratitude to living in Lebanon.  It is the ability to see more clearly Biblical stories and illustrations that I have heard all my life.  Allow me to share just a few precious images in my mind.

The other day we escaped the lockdown for a few hours and strolled along the promenad that runs along the sea.  Surprisingly many people were walking, running, sunbathing or fishing.  Some were talking on benches, but I think it is safe to say, that all of us were being refreshed to have a perspective change.  We stopped to watch two fishermen, but what grabbed my attention was a young boy.  Perhaps he was seven, maybe eight or nine.  He had on a red and white stripped shirt and blue pants that were clearly wet.  When he first caught my attention he was on a big boulder, near the sea, behind probably his father and grandfather, who were fishing.  He was brushing off his pants as if to try and dry them.  I’m guessing, they should not have gotten wet.

Then he scurried around bending here and there examining this and that as only a young boy can do and then he picked up something that snapped a familiar story all into a new perspective.

It was a small wicker woven basket with a big handle.  Every now and then, an older man (I am assuming his grandfather), would place little fish into that basket.  It was a gorgeous scene.  The older man.  The shimmering sea.  The happy energetic boy.  His bright clothing.  His basket.  I could so picture the rest of the story….him asking permission to go hear stories from a man.  His father and grandfather allowing him to go and bidding him to not get into any more trouble after seeing his wet pants.  Them telling him to take the basket with fish and a few pieces of bread, so he would have something to eat for lunch.  The rest of the story you know….. a boy and his basket.

Early in the Corona Virus time, before the lockdowns became very strict, we were able to slip up into the mountains and have a walk.  The mountains in Lebanon are delightfully refreshing and dotted with small villages that burst with colorful flowers and beautiful arched doorways, intriguiging stonework and windows with bright shutters.  We walked high into a rocky pasture and happened to have the privledge to watch a shepherd lead his sheep to a place to graze.  That was such an intriguing scene to us that are so removed from that way of life and livelyhood.  We peered over cliffs to follow the sheeps bleating and the shepherds leading, to a safe place.  Then I saw dotted all over the hill, where we were walking,  thorny, bramble bushes.  I stopped and I heard the Word become pictoral before me as I imagened a little sheep wandering away and getting stuck in that bush and a gentle shepard coming to rescue him.

There are many more images.  One of olives and how they grow and what it means to be pressed and go through a hard process to result in a useful oil.  Even the jug that the cold green pressed olive oil sits in reminds me of the woman who sent her boys to find more jugs and the miracle that then occurred of all those jars being filled so that they could live. 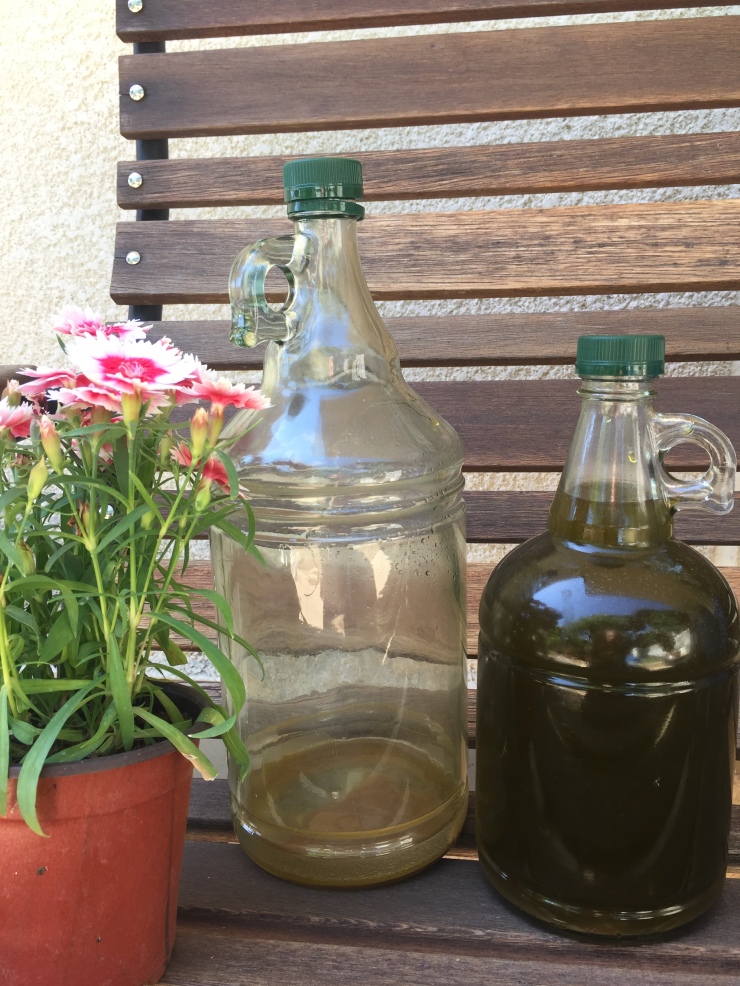 I see more clearly.  I am blessed beyond measure.  Even though I never dreamed or desired to be here, I am.  What has been given to me here, can never be taken away and it has only just begun.

What hard thing are you being asked to do right now?  What might you see more clearly through this “opportunity”?  Our stretching equals growth, if we will yield to the pain.